Fans oscillate slowly while I listen to the monk speak in a room at MCU Buddhist University near Wat Suan Dok. He iterates how all religions share common themes such as morality, love, and compassion and that sugar by any other name is just as sweet. He continued on that sexual orientation, gender, ethnicity, and religion were not to be discriminated against and that all were welcome. 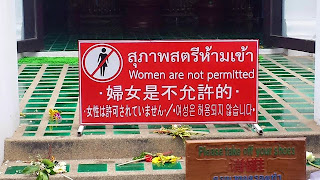 In Thailand and a few other Theravada Buddhist countries, women are not allowed to sit beside and touch monks because they are told they are temptations against the monks’ enlightenment. Women are also not allowed to enter certain sacred sides. When asked why we were denied entrance at the City Pillar, the monk said it was originally put in place due to possibility of menstrual cycles but now it is up to the Abbot, or head monk, and his personal beliefs.

I have grown up in a family with many sassy women who are career oriented and independent. My mother paid every dollar for her college tuition herself and was forced to finish her four year nursing degree into six. She has worked late nights saving many lives and is the breadwinner of our family. Her sister, has also been very successful as she was the Director, U.S. Market Strategy & Engagement for Microsoft for seven years and is currently the Global Head of Business Strategy & Growth for Facebook and has her own fashion line DB Style. I was raised to believe that men and women have equal opportunities and that barriers hindering these alienated rights were wrong and immoral.

In the five weeks I have been here, this blatant sign is only one example I have seen of gender roles. Various entrance signs to wats illustrated correct dress code and what not to wear; all of the pictures consisted of women models. Things like wearing a hat, tank tops, or shorts, could just have been easily violated by men. Then, as I was in the process of taking my shoes outside the temple, I was told a few times that wearing a hat was not allowed. However, I saw other men wearing them inside without being reprimanded. Lastly, when asking tour guide Icki about places women can go out to have fun, he claimed that women often stayed home and that it was not common for them to go out alone. His tone made me feel that he believed in that sentiment.

Observing these events were eye-opening and my initial reaction was hyperfeminist. Why were women so accepting to being denied entry at the City Pillar? Wasn’t the sign sexist and discriminatory? I have pondered at those thoughts and have since wrapped myself in one question– what does it mean to be a woman in Thai culture and is equal gender roles the only “right way?” My ideals are very American where one serves themselves and strives to be successful. I have noticed that the Thai way of life is more communal and that their decisions best serve the interests of their family and community. Perhaps, designated roles do not strictly mean a lesser quality of life.  I hope to continue witnessing the roles of women, men, and children alike in Thai society and further evaluate the point of assimilation of modern ideals versus tradition.