Thailand is one of the most diverse places I have had the opportunity to visit. With the advantage of viewing every activity in the program through a multicultural lens, Toua, Marissa, Ellie, Matthew and I were able to critically think and reflect on our travels while maintaining appreciation for each culture we learned about. Through our adventures in the various schools, villages, and geographical distinctions, we noticed the preservation of tradition and the presence of the human ecology model through the clothing choices and the balance of a simple and peaceful lifestyle.

During our study abroad program in Thailand, we had the opportunity to visit multiple villages and learned that there are more than nine major hill tribes in Thailand;  Lahu, Lisu, and Hmong are some of the hill tribes that we learned about.  Hmong is an ethnicity that originally originated in southern China and moved to many countries including Vietnam, France, America and Thailand after the Secret War. Before this trip, I thought all Hmong people in Thailand were going to be very traditional and uphold their traditional language. While visiting the Hmong village, Pha Nok Kok, I witness that some of their people were losing their language. For example, the Hmong lady who show us her grandma’s house struggled to speak Hmong and tended to substitute a couple of Thai words each time she speaks. Surprisingly, this was not that different compare to the Hmong population in the United States; I found this to be very similar to my family because growing up in America, we are surrounded by English speakers and have no choice but to speak English. Fortunately, I often speak Hmong at home and with my friends, so I’m still able to preserve my traditional language,  unlike my younger siblings that were born in the United States who can’t speak Hmong at all.This is a prime example of a phenomenon that many immigrants face as they attempt to assimilate to their new country.

Similarly, throughout disadvantaged villages in Thailand, as children are sent to schools such as the Suksasongkroh Chiang Dao School to get a free education, we observed the struggle to preserve socio-cultural traditions since majority of the students only visit their homes on holidays. In my opinion, this level of the human ecological model has one of the largest contributions to a person’s identity; when children are removed from this environment, some of their identity is stripped away. In addition, the schools are built far away from the villages, which impacts the family systems as well because distance can often weaken interpersonal relationships. Another characteristic within minority cultures in Thailand is marginalization. Each of the villages we visited mentioned facing discrimination for not belonging to the dominant culture of Thailand. We learned about the obstacles they face when attempting to gain citizenship and drivers licenses, which negatively impacts the families in these villages. For example, when family members are “stateless” they receive less benefits from the government and therefore are less able to engage in the basic family functions essential to the wellbeing of society. Overall, after analyzing these diverse villages and minority groups, we have able to broaden our understanding of multiculturalism in Thailand.

The Suksasongkroh Chiang Dao School we visited had many multicultural aspects. This school boards and educates children coming from low socio economic homes as well as students that have been abused, orphaned, or exposed to less than adequate family and living situations. The students also come from four different districts  and more than nine different ethnic groups. In order to accommodate the diverse population of students, the curriculum includes teaching five languages including Thai, English, Chinese, Japanese, and Spanish. They also learn about both Christianity and Buddhism.

The school provides students with uniforms to wear, which creates community among the diverse backgrounds. With the school clothing protocol they balance between unity/equality and the preservation of tradition and individuality. Since the students are coming from various cultures, it is important to create an open and accepting environment that includes the majority of their practices and beliefs. The school recognizes that it is also essential to preserve and embrace the individuality and traditions of each student’s culture. One of the ways this school promotes the diversity and preservation of culture is by having the students dress in their traditional attire every Friday to embrace each of their individual cultures. With this system, I noticed the use of balance; This is an important aspect prevalent in Thai culture, likely stemming from Buddhist practice.

Buddhism intermingles within the Thai  culture as well as into societal norms and opportunities. During school breaks, some students go to see their families while other students choose to be Monks during this period. As I learned during our monk chat, Buddhism isn’t a religion, it’s a practiced philosophy. Thai culture seems to intertwine with Buddhist practices heavily throughout their lives. Buddhism could be considered to be apart of the socio-cultural environment on the human ecology model; it influences not only beliefs and culture of the society but also the education system and structure, as well as the opportunities and resources available.

Another way multiculturalism can be seen in Thailand is through its geographical distinctions. These geographical distinctions can play a part in making the Thai culture more diverse and more accepting. For instance, the two and a half weeks I have been here I noticed a completely different culture between the southerners of Thailand (Bangkok) and the northerners of Thailand (Chiang Mai, Chiang Rai, Chiang Khong etc). Bangkok as a city is massive, there are tall buildings, lots of people, and way too many cars to count. When speaking with my colleague Ernie, who has strong ties to Bangkok, and who has lived in the city for many years. It was fascinating to hear what life in Bangkok was like; one thing I found intriguing was that everyone in the city wants to have a pale skin tone. The pale skin indicates the person either having a job indoors, or residing indoors instead of working in the field or on a farm, which is commonly associated with wealth and power. This is a prime example of status and hierarchy, which are elements of socio-cultural environment through the Human Ecology Model.

Before traveling to northern Thailand, I was expecting the same type of vibe that Bangkok gave; I could not have been more wrong. Arriving in Chiang Mai felt more like going into a different country, rather than just domestically traveling. Although still a city, it was much more relaxed and calm than the hustle and bustle that big cities tend to encompass. This region seemed to be more country people and farmers as well; the driving was even different with a lot less traffic and aggression. I observed that this reflects the people of Northern Thailand and their laid back nature; they had pride in their work and they were proud to be from the north. As described above, both regions have differences in their cultures. However, one thing that cannot go unnoticed is the overlying theme of the preservation of traditions in each region. There are people in both regions that come from many ethnic backgrounds and care very deeply for these values and traditions. This demonstrates the acceptance that the Thai people have for each other and their unique culture in which they come from.

I feel especially grateful for the opportunity I have had to converse about the many different aspects of Thai culture with this group of scholars. Toua shared personal insights to the Hmong culture here while providing intelligent contrasts to his Hmong family and culture back home. Marissa helped us analyze the cultural appropriation within the sociocultural aspect of the Human Ecology Model. Ellie highlighted the appreciation Thailand has for their youth’s educational system, and the diversity that knits it all together. Matthew pointed out the cultural differences between the various geographical locations in Thailand, and the influence of western culture on the modern parts versus the traditional preservation the smaller cities and villages hold. The exposure to multiculturalism within the educational systems, the hill tribes and villages, and the geographical locations has enriched each one of us with intelligence that we would not be able to find on our own. Multiculturalism surrounds us on a daily basis, and I believe this trip has made us more observant and appreciative of the diversity that makes up Thailand, and more importantly, our world. 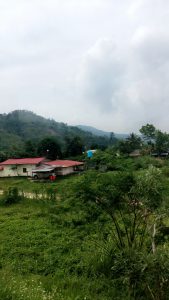 One thing that really struck me in my first week in Thailand was the idea of socio-cultural environment through the Human Ecology Model. The socio-cultural environment can be described as relationships, beliefs, language, laws, and cultural values and norms. I find this idea a lot different in Thailand than in the United States. For instance, I feel that in Thailand the elders are much more respected and are looked upon as people with wisdom and experiences that can benefit the community. I am not saying it is non-existent in the U.S. but it seems to be much more apparent here in the culture. One experience I had was when we visited the Chiang Dao School, the kids were so awesome and extremely respectful of their teaches and faculty. They were not only respectful to them but also to us foreigners, always properly greeting and staying engaged. It was really cool to see. I think this is extremely important due to the fact not only can you learn from the experiences and wisdom of an elder, but I believe it brings a sense of unity and foundation for a  strong community.

Another thing I have noticed is the diversity in Thailand. There are so many rich cultures in Thailand that are so different from each other.   It seems that everyone has a sense of Thai nationality, but also has rich traditions that are unique to their specific culture. It was also saddening to hear that minority groups are discriminated by some Thai people.  When visiting Pha Nok Kok village I was immersed in the Hmong  culture and was blown away about their traditions and culture. I loved how I could relate differences and similarities to my own culture to a culture that I had no prior knowledge of before this trip. It was an unforgettable experience to say the least. I found it also really cool to see the Hmong students in the group get to speak with the locals of the village. My fellow classmate Sia, did a wonderful job translating to English for a village elder as he was speaking to us.

Overall, the first week has been a truly eye opening and an experience incomparable to anything that I have ever done. I have met so many wonderful people and learned so many things that I cannot wait to see what the next weeks are like!

My name is Matthew Fuller and I am just finishing up my junior year. I am studying Biology while also minoring in Management. I love the outdoors and as of now my favorite place on Earth is the Boundary Waters Canoe Area in northern Minnesota. I am the youngest of 4 and have 3 older brothers. I owe them a lot of credit for shaping me into the person I am today. One learning goal I have for this program is to become more immersed in the Buddhism religion. I find religion fascinating and find myself wanting to learn more about something that I have little knowledge about. I am very excited to have conversations with the monks and to learn more about their way of life. Overall, I can’t wait for this trip and truly feel like it will be a trip of a lifetime!

This picture was taken last summer near Lake Atitlan in Guatemala, I was hiking San Pedro volcano! 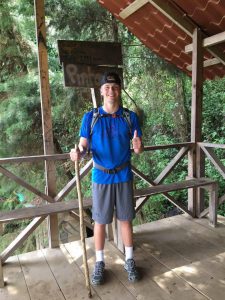