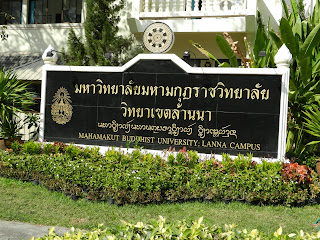 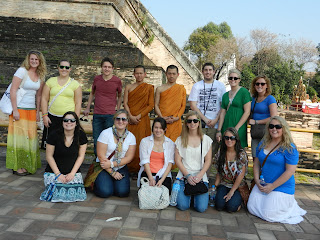 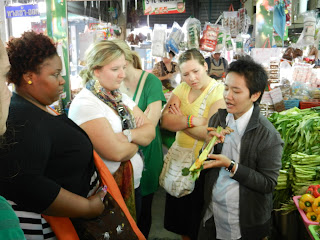 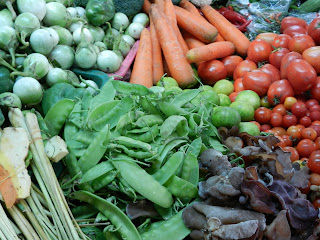 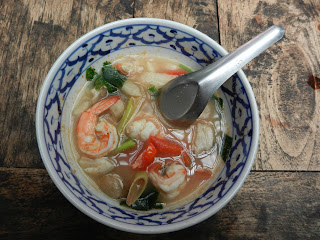 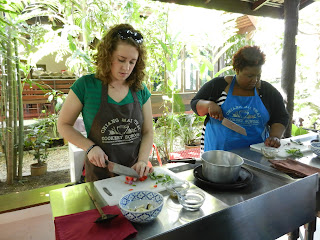 Sawatdee, Ka!  We’re having a bit of trouble accessing the blog, so things may appear here sporadically.  However, we decided to go public with our group’s Facebook site, so you can also find pictures and updates at  https://www.facebook.com/groups/thai2012/
We’ve had a great couple of days in Chiang Mai.  Day 1 was learning how to cook Thai food – four dishes including Tom Yum Kung (Hot and Sour Prawn Soup), Gang Keow Wan (Green Curry), Kanom Gluay (Steamed Banana Cake), and Pad Thai (self explanatory!).
In the afternoon we participated in a monk chat at the Buddhist University Lanna campus.  Monk Sam, as he asked us to call him, shared about his life as a monk and a bit about Buddhism.  I will try to post a picture or two after finishing this!
Yesterday we had two excellent lectures.  The first was at SuanPrung Psychiatric Hospital where two doctors explained the mental health care system in Thailand and some of the challenges of getting past the stigma of mental illness in this culture.  In the afternoon we visited Chiang Mai University Faculty of Nursing and learned about the surveillance system for tracking HIV and AIDS in Thailand.  This country is a global leader in HIV-AIDS tracking, treatment and prevention.  We learned that the nursing faculty at CMU has other connections to the University of Minnesota through the One Health project.
Today the students are off to ride elephants, visit a waterfall, and do water rafting.  Dr. Jill and I are catching up on work and will explore the city this afternoon on our “down” day.  Tonight is New Year’s Eve – we’ll let you know how we celebrated.  In the meantime, Sawatdee, Bee Mai- or Happy New Year!

It doesn’t seem as though we are only 3 days into our trip being that each day has been full of exciting opportunities and experiences. Yesterday, which happened to be Thursday for us, consisted of learning more about the Thai culture in regards to their food and Buddhist religion. We were taken to a local food market where we were introduced to the different ingredients used most commonly in Thai dishes. Particularly the differences between the types of basil, ginger, eggplants, uses of coconut, and noodles. It was very fascinating to see how the market operated and the variety of items you will find there. After the market, we headed to the Chiang Mai Thai Cooking School where we created 4 authentic dishes we prepared individually. The staff of the cooking school were very helpful and eager to teach us. My favorite dish that we made was the Pad Thai, but I’m not a huge fan of the tofu, rather strange taste/texture. The green curry was very hot, I don’t do well with spicy food.

After the cooking school experience, we ventured to temple where we were able to sit and converse with a monk. Our monk was very funny, he was constantly making jokes which we didn’t pick up on his humor right away, due to assuming monks were rather reserved and serious. But, another stereotype proven false. I learned quite a bit about Buddhism as well as what it was like to be a monk. I thought being a monk meant you were in it for life, similar to a Christian priest. After the monk completes their schooling, like attending college, they can pursue a “commoner” lifestyle and choose to find a career. We asked our monk what he wanted to do after he completed his schooling and he said he wanted to be a sniper (obviously joking). I cannot describe the beauty of the temples, each adorned with amazing detail and architecture that is unique to their culture. The Buddha symbol has evolved over the many centuries of its existence and were displayed in the large temple. Buddha also appears characteristically different based on what region you live in, also quite fascinating.

Our next destination after visiting Temple was the Royal Flora, equivalent to the Minnesota State Fair in terms of flowers. There were amazing floral displays and exceptional amount of detail incorporated in the exhibits. Some were based by regions and concepts, such as education about groundwater and an exhibit about dairy cows. We rode on the ferris wheel, which was pretty neat being able to see the entire park from above. All in all it was a very long, yet fun-filled day. Tomorrow, New Years Eve in fact, we are going to go and ride elephants. This has been one of the most anticipated days by the majority of the group here. I look forward to reflecting on this experience! Stay tuned…

We’ll be leaving from Minneapolis bound for Thailand, on December 26, 2011.  Look for our first posts sometime around December 28!