During the homestay, we found it difficult to communicate with the families, as we could not speak the same language. We found that using actions could help us while interacting with our host families. We acted out motions to wash dishes, eat, and determine sleeping arrangements. Although we may have looked foolish, our host mom always laughed and nodded her head as a way of showing she understood. Through our experience at the homestay and other interactions we have participated in with the Thai people, we have learned that smiling, laughing, and thumbs-up go a long way and can be just as significant as verbal communication.

With the nickname, “The Land of Smiles,” how could one not love Thailand? Since we’ve been here, it’s safe to say that we haven’t seen one frown… Or have we? They say that Thai people have 13+ different smiles, some of which are joy, disgust, admiration, disagreement, convenience, etc. These Thai smiles are impossible to detect if you are a foreigner, or farang, but easily readable if you are a native.

As Westerners, we are socialized to always express our emotions outright but as an Eastern, and predominantly Buddhist, culture Thais are socialized to not cause suffering on others, which leads to subtle expression of emotions. An example of this from our trip is when we asked a native Thai if they were at all scared of the government (something that is taboo to talk about here); they answered honestly and said “yes, I am sometimes,” but with a smile on their face. We found it curious how their emotions and facial expression were so contradictory.

Another not so obvious norm of the Thai culture comes from the heavy Buddhist influence. It is the avoidance to not cause others harm of suffering, which was brought up by KK in our monk chat. This is reflected in the many different ways to interpret a smile, as well as the kindness and lack of anger and worry as presented by the people we have come in contact with. When encountered with a problem, we have noticed that improvising comes easily and there is usually a very smooth transition so that we are unaware that a problem ever occurred.

We have noticed this is a very positive light, as everyone wants our group to have the best possible experience. However, this has raised a few questions for us. It can be uncomfortable at times to have someone wait on you so heavily, and go so much out of his or her way to please us. The questions brought up are: how can the people handle so much holding in of emotions, and what possible repercussions might this have?

A frustrating aspect of Thai culture we have encountered is the perceived indirectness and roundabout method of communication within conversations. In the United States, we are socialized to be direct and efficient, especially in business. The more efficient we are the more money we will save and generate. In personal settings, we are taught to be direct and open because it’s seen as dishonest if we don’t. I remember as a child in some of my classes we went around the room and “checked-in” meaning communicated how we were feeling and how we could have a happier day. However, in Thailand and other East Asian countries, the maintenance and furthering of harmony is above individual emotions and feelings. To be direct causes others to lose face.

Thais operate in high-context cultures where previous relationships, non-verbals, established hierarchies and indirect communication shape social cues and communicate individual’s emotions. Americans usually operate in low-context situations where words are taken at face value, everyone is said to be equals, and clarity and preciseness are valued. When these two styles come in contact effective communication can become complicated. While driving around Bangkok with Nicki and Minnie, they were providing information about the surrounding area. I remember driving through what appeared, but I could be mistaken, an impoverished area and Minnie, instead of commenting on the reality of the situations, talked about the harmony between all of the religious groups in Thailand. It was troubling to me hear about this interconnectedness while also witnessing the dire poverty we were traveling through. If we look away from our Western lens, however, Minnie might have been focusing on the peacefulness of groups not because she was unaware or unconcerned about the problems facing Thailand but because talking openly might cause Thais or us to lose face. 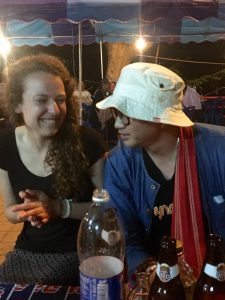 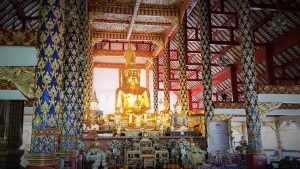