The first week in Thailand has already come and gone, and I have already learned so much. As a Filipino-American, I have been finding myself constantly comparing my observations in Thailand to the United States and the Philippines. A common phrase heard in Thailand is “same, same, but different,” and I think this phrase accurately describes my experience in Thailand thus far.

When we first arrived in Bangkok, my initial observations were of the road infrastructure. I was really impressed by the construction of the highways and organization of traffic. I found it different to the Philippines but similar to the US, except that the lanes and driver’s side switched. On one of the first nights, I realized the difficulty of crossing streets as traffic seemed to be never-ending as we constantly had to check left and right. However, the drivers rarely honk, and they are not really as aggressive as those in the Philippines.

One thing I recently realized is the influence of the primary religion/philosophy on the people. In the Philippines, Roman Catholicism significantly influences the interactions between people and also the government. In the US, there is much diversity when it comes to religion, but Christianity is claimed to be the majority. We learned that in Thailand, 95% of the population is Buddhist. During our monk chat and visit to the local temple, Wat Suan Dok, we learned more about how Buddhism is a philosophy not a religion. Buddhism focuses on the belief in karma, what goes around comes around, and the practice of meditation and concentration. Pra KK emphasized that the future is impermanent and balance of the mind and body is key. Therefore, one should not be stressed. One should be simple, calm, take it easy. Through my experiences and interactions with local people this past week, I can observe the Buddhist philosophy within them as people are soft-spoken and move at a slower pace (which I even observed in their traditional dances). The Thai people are so friendly, respectful, welcoming, and peaceful! 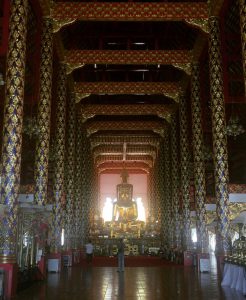 A couple of my favorite outings were the traditional Khantoke dinner and the Thai cooking class in the beautiful landscape of Chiang Mai. 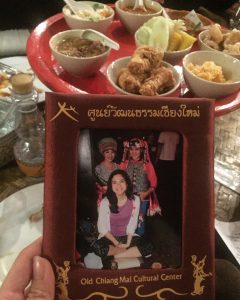 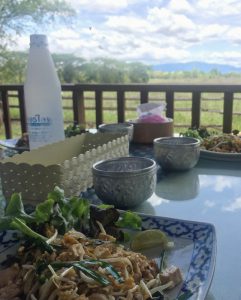 This post is just a snippet of all the great things and experiences we have had the past week. I have thoroughly enjoyed each outing (and meal because the food here is delicious!). I am looking forward to more learning experiences over the next two weeks!

One thought on “Blog #2: Same, Same, but Different – Anna Borromeo”